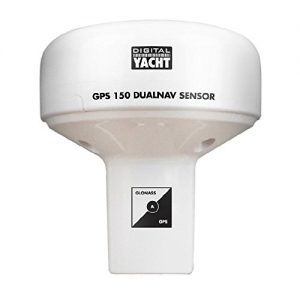 Digital yacht GPS150 dualnav GPS antenna the GPS150 dualnav positioning sensor combines a super accurate 50 channel GPS with glonass, the Russian funded satellite positioning system that is now on line and providing an excellent back up or alternative to GPS. This "smart" sensor will automatically switch between the systems or the user can manually select the most appropriate for their activity. The GPS150 will also be able to utilize the European funded Galileo positioning system when it comes online (IOC- initial operation capability in 2018).The implementation of glonass as an additional satellite positioning system is probably the biggest step change in maritime navigation since GPS was fully augmented back in the mid 90's. Digital yacht's GPS150 utilizes the industry standard NMEA data format allowing older chart plotters as well as current generation products to take advantage of this new technology. The GPS150 also allows the user to select a variety of different NMEA baud rates (4800, 38400 and 115200) to allow interfacing with legacy and current systems. It also supports a new turbonavt mode which will appeal to racing yachtsmen and performance users where GPS/glonass data is output at 10hz (10 x faster update than normal) and with an interface speed of 115200 baud which is 24 x the speed of normal NMEA data. This massively improves slow speed navigation data as well as providing the best course and speed data in a dynamic situation. The GPS150 houses all the electronics in its compact 75mm antenna and has a single multi core cable for power and data. Power consumption is just 30ma at 12v. It can be used as a simple positioning sensor for plotter or vhf DSC systems as well as a precision, high speed sensor for performance sailing/super yachts. The GPS150 can also connect to the wln10 wireless interface to allow data to be sent to mobile devices such as iPhone.

Get Yachts Deals And More..